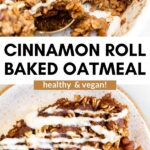 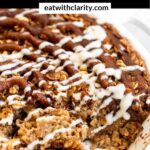 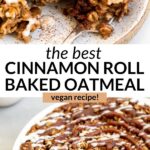 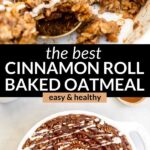 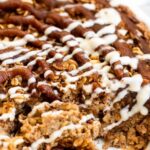 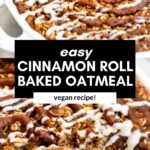 This baked cinnamon roll oatmeal is filling, sweet, but not too sweet. It’s easy to make, perfect for meal prep, and tastes just like a cinnamon roll! Plus, it’s naturally vegan and gluten free.

I know this oatmeal is cinnamon roll flavored, so “healthy” is probably not the first word that comes to mind. However, I promise this recipe is 100% good for you!

Oats: I recommend using rolled/old fashioned oats for this recipe. Quick oats are ok if you’re in a pinch, but rolled oats work best!

Apple sauce: The apple sauce helps bind all of the ingredients together and gives the oatmeal a really nice texture once baked.

Non dairy milk: Vanilla almond milk is my go to for (almost) everything, but any type of milk will work!

Coconut oil: To keep the oats nice and moist.

Vanilla extract: The vanilla adds a bit of extra flavor.

Cinnamon: A decent amount of cinnamon is very necessary for this recipe! I prefer ceylon cinnamon, but any type of cinnamon works well.

Baking powder and soda: These will help the oats rise a bit and give it a nice cake -like texture.

How to make baked oatmeal

Unlike regular stovetop oatmeal, baked oatmeal is almost a “set it and forget it” kind of thing.

Add the oats, cinnamon, salt and baking powder to a bowl and mix well.

Add in all remaining ingredients and stir together. The mixture should have a good amount of moisture, but you don’t want it to be overly liquidy or it won’t bake all the way to the center. See the above image for reference.

Add to a 9 inch round, oval, or square baking dish and add to the oven. You can use a smaller pan, but the deeper the pan, the longer the oats will take to cook.

Bake for 30-35 minutes, or until a toothpick comes out clean and the edges and top of the oats are golden brown.

While the oats are baking, prepare the cinnamon sugar glaze by adding the cinnamon, coconut oil, and coconut sugar to a pan and heating over low heat. If it appears too dry, add in the 1 tbsp of water. However, if it gets too liquidy, it won’t swirl very well, so just add in extra sugar to balance this out.

Let simmer until the sugar and oil melt and form a sticky syrup. It will get thick if it sits out too long, but just turn the heat back on and it will melt again.

Does it keep? This cinnamon roll oatmeal will last in the fridge (already baked) for about 3-5 days. You can store it in the same container you baked it in, and just cover it with aluminum foil.

What size dish is best? I usually use one large baking dish, but you can split it up into smaller dishes if desired. Smaller dishes will require a shorter cooking time, so keep an eye on them! I used a 9 inch pie dish, which worked really well, just make sure it is at least 2 inch deeps.

Can I reheat it? Yes! I actually love the texture of baked oatmeal when it has been reheated oddly enough. It thickens up as it sits in the fridge, but I personally love it this way. To reheat this recipe, I suggest just popping it back in the oven for about 10-15 minutes at 200 degrees Fahrenheit or until it is warm.

Is oatmeal gluten free? This recipe is gluten free, but just be sure to used certified gluten free oats to make sure there was no contamination while processing!

Lastly, if you want more recipes straight to your inbox, be sure to subscribe to my email list. As always, tag me on instagram if you make this recipe so I can see your creation! Be sure to leave a rating/review if you like this recipe! 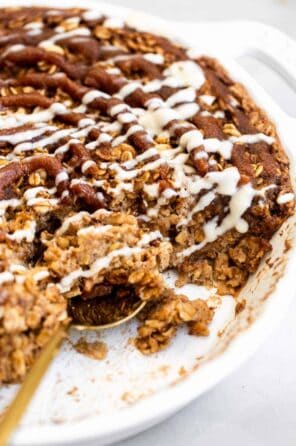 This baked cinnamon roll oatmeal is filling, sweet, but not too sweet, and shockingly healthy. It's easy to make, perfect for meal prep, and tastes just like a cinnamon roll! Plus, it's naturally vegan and gluten free.
/ /
Prep: 5 mins
Cook: 30 mins
Total: 35 mins
6 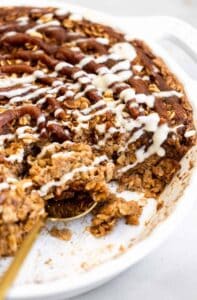 Did you make this?

This site uses Akismet to reduce spam. Learn how your comment data is processed. 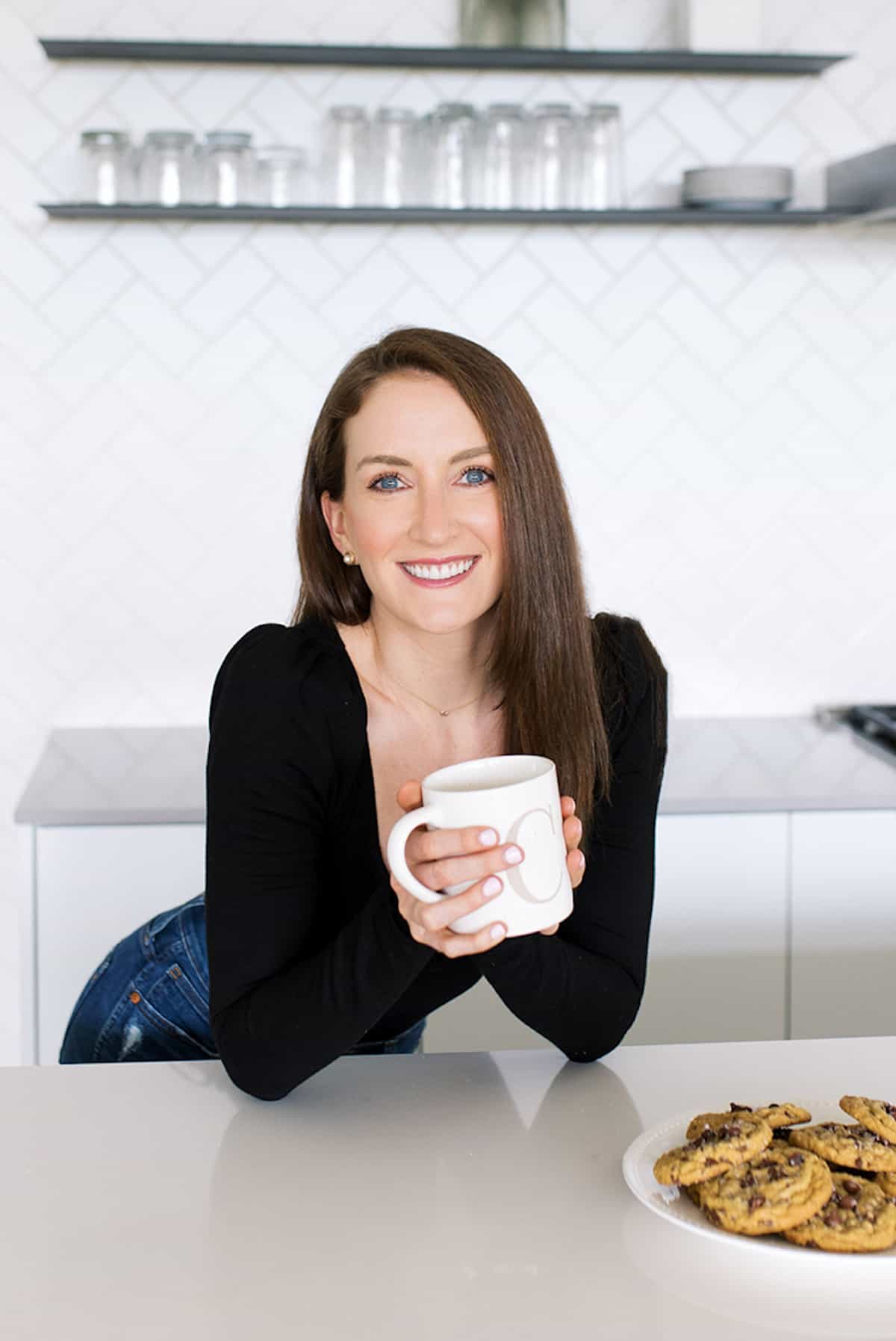 Eat With Clarity is a place for gluten free recipes that are just as good as the real thing. With plenty of vegan, vegetarian and paleo options, there is something here for everyone! 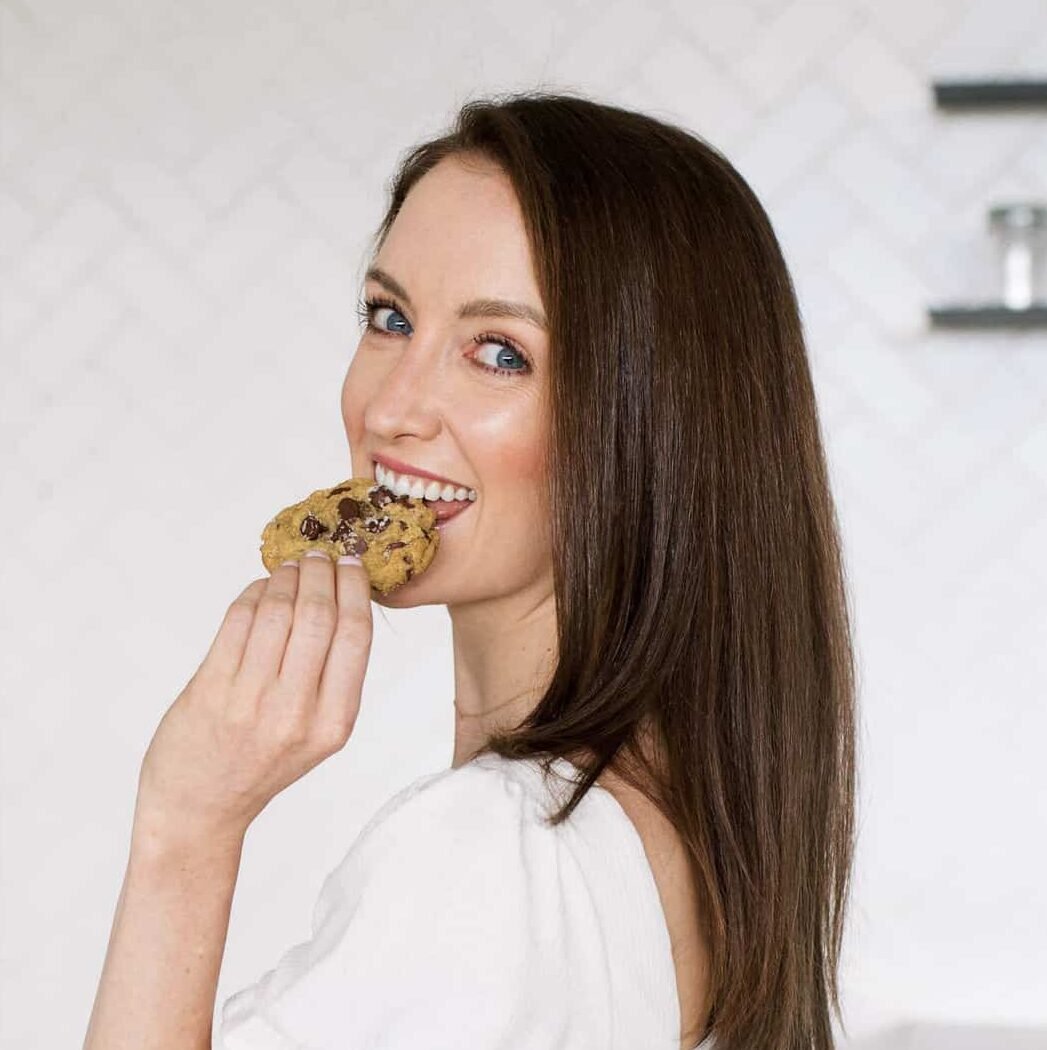 Site by Katelyn Gambler & Made To Thrive